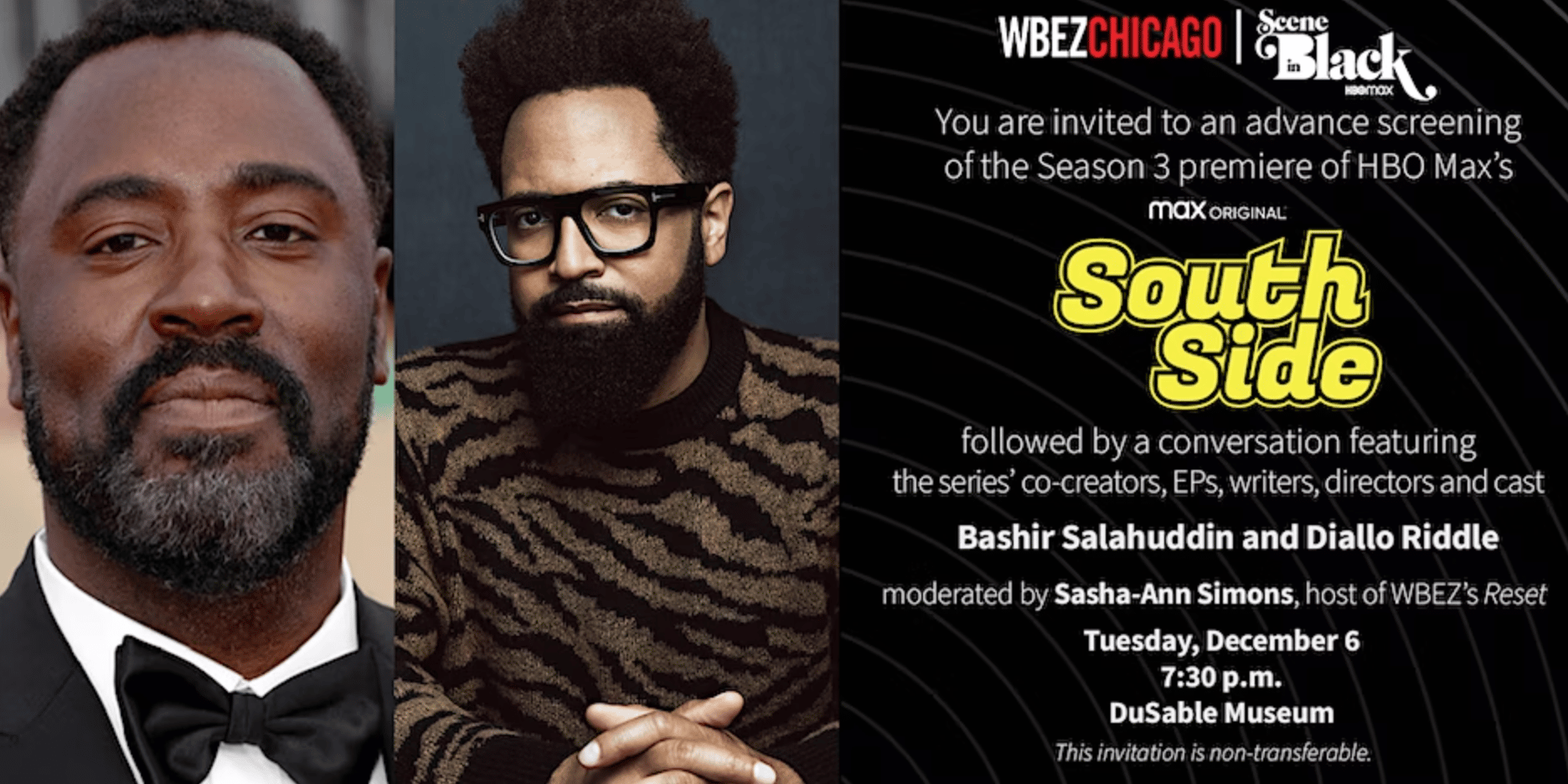 Join us the evening of Tuesday, December 6th at the DuSable Museum for a special advance screening of the season three premiere episode of HBO Max’s South Side. The screening will be followed by an intimate conversation with series co-creators, executive producers, directors, writers and cast Bashir Salahuddin and Diallo Riddle, moderated by WBEZ’s Reset host Sasha-Ann Simons.

Shot on-location in Chicago, South Side follows Simon (Sultan Salahuddin) and K (Kareme Young), two enterprising best friends ready to take over the world as they hustle and dream their way through the Windy City – when they’re not too busy working as furniture repo men at the local Rent-T-Own. Featuring cunning cop Turner (Chandra Russell) and her clueless partner Goodnight (Bashir Salahuddin), flailing local politician Allen Gayle (Diallo Riddle), aspiring singer Stacy (Zuri Salahuddin), and an ever-expanding crew of real-life Chicago residents, the series offers a glimpse at what it’s like to live on the South Side with humor and heart.

This event is free and open to the public on a first come, first served basis.

Registration is required but does not guarantee entry. We encourage you to arrive early.

Bashir Salahuddin is co-creator, executive producer, writer, director and star of HBO Max’s comedy series South Side. He is an Emmy® nominee for Late Night with Jimmy Fallon, a SAG Awards nominee for GLOW and an NAACP Image Awards winner for his work directing South Side. His recent acting credits include Top Gun: Maverick, The Dropout, Cyrano and Marriage Story. He is also co-creator, executive producer and star of the variety comedy series Sherman’s Showcase on IFC, for which he was nominated for a Critics Choice Award for Outstanding Actor in a Comedy.

As an NAACP Image Award-winning director, and Emmy® and WGA-nominated writer, actor, showrunner and producer, not to mention moonlighting DJ, Diallo Riddle has proven to be one of the most multi-faceted talents in the entertainment industry today. Riddle, alongside his creative partner Bashir Salahuddin, have launched many critically acclaimed hit projects over the years through their production company J30 Studios. And they’re just getting started…

In addition to Sherman’s Showcase, Riddle and Salahuddin created, write and star in the HBO Max series South Side, which is slated to debut season three this December. The show follows a rent-to-own business on the south side of Chicago (the Englewood neighborhood) and gives an authentic look into what life on the south side is all about. Seasons one and two of the series were met with critical acclaim; both are Certified Fresh with a 100% rating on Rotten Tomatoes. Vanity Fair writes “it’s that kind of sharp, careful, hyper local writing that makes South Side a joy.” Paste Magazine hails the show as “wild, weird, and 100% worth visiting,” and Chicago Sun-Times calls it “a fearless, unapologetic, equal opportunity offender.” Riddle won his first NAACP Image Award in 2022 for his work directing the series. The show was also nominated at the 2022 Black Reel Awards for Television in the Outstanding Comedy Series category.

This invitation is non-transferable