Join us for an evening packed with exciting unveilings of new experiences at the Mitchell Museum!

This premium event is open to the public. Admission is free for Mitchell Museum members and Tribal Citizens; $25 for non-members. Be among the first to witness the unveiling of our new mural and meet the 9 young artists that created it. The mural is part of a collaboration with St. Kateri Youth Circle, a non-profit that provides programming on Native American values and traditions for Native youth in the Chicago area. We will also be revealing our new online exhibit that highlights the exceptional children’s books Atika’s Medicine and I’m Not A Costume by author Maria Des Jarlait (Arikara, Ojibwe), who will also be on hand to share her stories and sign copies of her books for attendees.

The evening will also include food catered by Native American Foods and casual tours of our new Indigenous Medicine Garden as well as our Collections!

We are excited to announce two new perks for our all our members: Exclusive member walking tours and checking out books from our library!

Not a member yet? Our annual museum memberships start at just $40. You can find more information about member benefits here.

Join us for our artist discussion about their work and who they are as artists. There will be a live Q&A at the end of each discussion.
Justin Gauthier – A proud citizen of the Menominee (Omāēqnomenēw) Nation of Wisconsin, writer/actor Justin “Jud” Eagle Gauthier studied at the Institute of American Indian Arts in Santa Fe, New Mexico, where he earned an M.F.A. in screenwriting. Jud provides audiences across the nation a wholly unique worldview as an indigenous cultural ambassador with undeniable pop culture acuity. Jud would like to say wāēwāēnan (thank you) to all his family, friends, cast mates, crew, and audiences for helping him to become a better storyteller.
_______________
This is a free virtual discussion series open to our members, friends, and visitors. As we continue to work on developing more programs, please consider donating to the museum. https://mitchellmuseum.org/donate/
We want to thank each one of our featured artists as well as our sponsor. This artist’s program was generously funded in part by Evanston Arts Council.
For more information about this program, please contact: info@mitchellmuseum.org
(847) 475-1030 | www.mitchellmuseum.org/events/

Join us on Thursday, August 18th at 6:00 p.m. as we welcome Journalist and Founder of Native News Online Levi Rickert to the Mitchell Museum of the American Indian. We invite you to this in-person conversation and Q&A to celebrate Rickert’s work and the release of his first book Visions of a Better Indian Country: One Potawatomi Editor’s Opinions.

Levi Rickert, a citizen of the Prairie Band Potawatomi Nation, is a Native American journalist, who founded Native News Online in February 2011.

Since then, Native News Online, with over three million readers who come to its website annually, has become one of the most read daily Native American publications in the country. In October 2020, he co-founded Tribal Business News.

Since the beginning of Native News Online, Rickert has covered stories on dozens of Indian reservations, White House tribal nations conferences and congressional hearings in Washington, D.C., and events throughout Indian Country.

With a social media following of over 500,000, Rickert has become a strong voice in Indian Country and is often called upon by other media outlets as an expert to discuss American Indian affairs.

While an author with essays in three books, his first book Visions of a Better Indian Country: One Potawatomi Editor’s Opinions was published by Indian Country Media, in April 2022.

This intimate conversation with Rickert is free for Mitchell Museum Members and $10 for non-members. Admission for Native citizens is always free. Tickets can be purchased in advance or onsite. 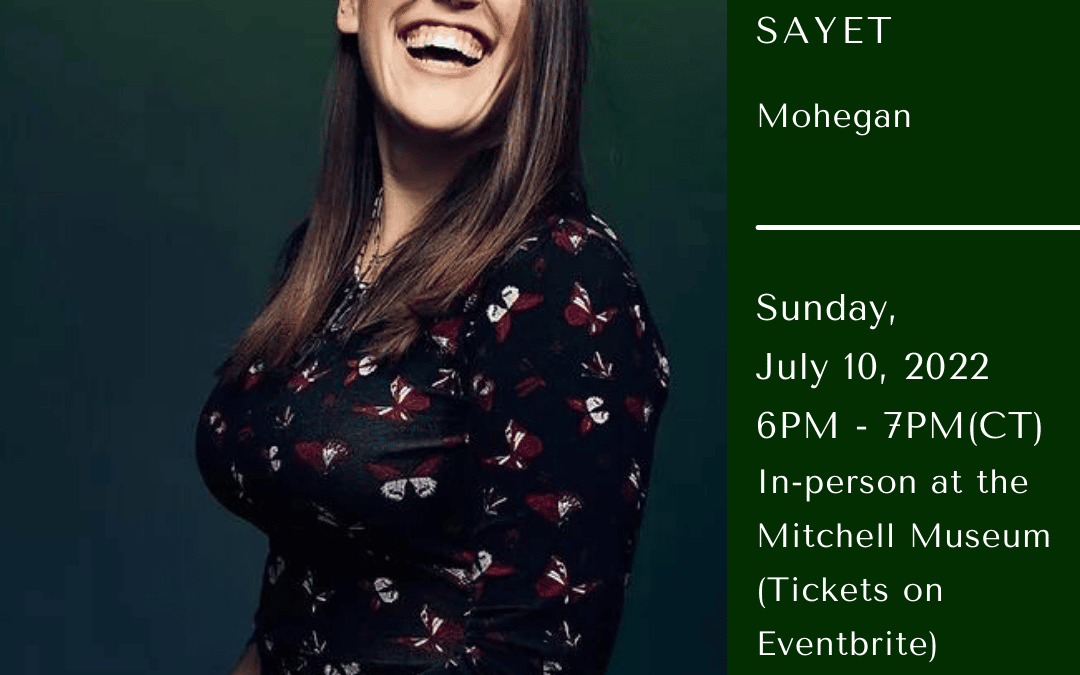 Join us on Sunday, July 10 at 6:00 p.m. as we welcome award-winning Mohegan director, writer, actor, and educator Madeline Sayet to the Mitchell Museum of the American Indian. We invite you to this in-person conversation and Q&A to celebrate Sayet’s work and the production of her solo play, Where We Belong, now showing at the Goodman Theatre as part of a national tour presented by the Woolly Mammoth Theatre Company in association with the Folger Shakespeare Library.

Where We Belong, at the Goodman Theatre through July 24, 2022, is a personal story of an Indigenous theatre-maker’s journey across geographic borders, personal history, and cultural legacies; in search of a place to belong. Sayet’s autobiographical account in Where We Belong shares her experience pursuing a Ph.D. in Shakespeare in England. There she finds a country that refuses to acknowledge its role in colonialism while echoing a journey to England braved by Native ancestors in the 1700s following treatise betrayals, forcing us to consider what it means to belong in an increasingly globalized world.

This intimate conversation with Sayet is free for Mitchell Museum Members and $10 for non-members. Admission for Native citizens is always free. Tickets can be purchased in advance or onsite.

Family Day at the Mitchell Museum of the American Indian

The Mitchell Museum of the American Indian in partnership with the Native American Chamber of Commerce of Illinois and St. Kateri Center of Chicago

Join us for an afternoon of summer fun featuring crafts, food, native artists, and so much more!

For more information about this program, please contact: info@mitchellmuseum.org