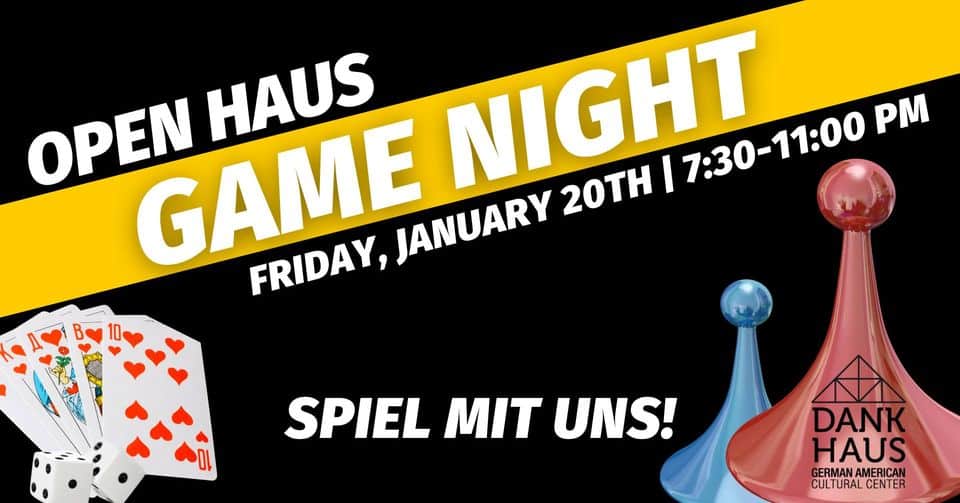 Our January Open Haus will be the best game night in town! Did you know that Germans invented the jigsaw puzzle and board games? Bring your friends and your competitive spirit and celebrate Germany with a night of German food, drink, games, and Gemütlichkeit! We’ll have games of all types – board games, card games, ping pong, foosball, and more! 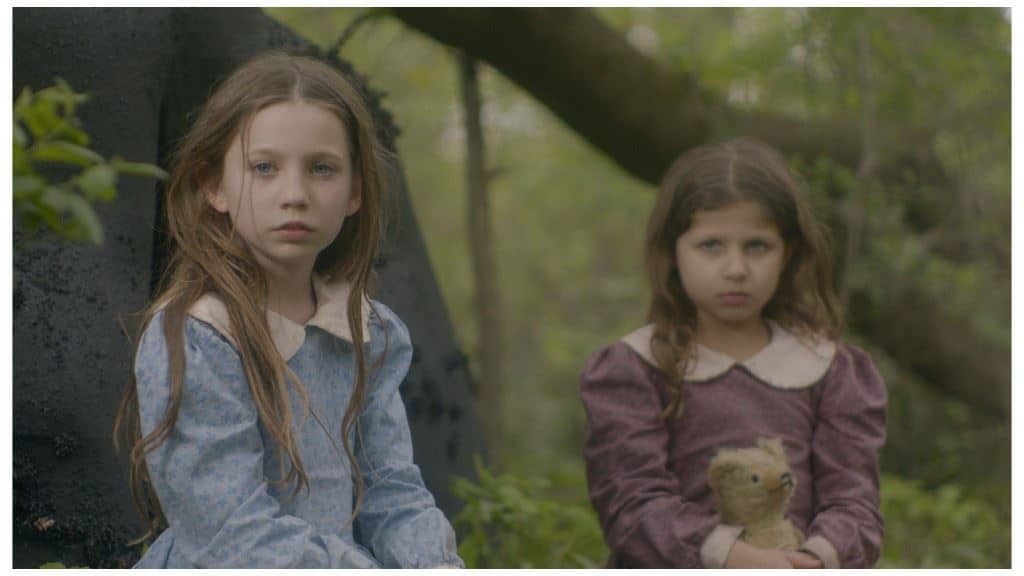 Join us for a screening of Chicago director James Fotopoulos’s film “Two Girls.”

This is the story of young sisters in the American Midwest left alone with their increasingly unstable mother while their father is fighting in the Civil War. The film traces the girls’ naturally fraught sibling dynamic and the ways that their father’s absence ignites their imagination. When they meet a stranger in the forest they become enchanted by a world of creative work and nature, a welcome distraction from their volatile mother. Play and the dreamlike space they inhabit provides an expansive and ultimately grounding setting for the girls’ response to war.

Filmed in Chicago, this work is an experimentation on a children’s fairy tale. Two Girls features German actress Isolda Dychauk.

This event is available for free.

“Perhaps no other moviemaker so categorically denies compartmentalization, falsifying dichotomies of underground and art film, narrative and abstraction, and black box and white cube, while unabashedly appropriating, celebrating, and upturning the conventions of the horror, sci-fi, hardboiled, and melodramatic genres.” – Fantasma: A James Fotopoulos Retrospective – Spectacle

“Fotopoulos is certainly an auteur who makes up in artistic integrity what he forgoes in mainstream appeal …his films are imbued with unparalleled aplomb.” – Mapping the Obscure: James Fotopoulos Retrospective – Cine-File

“Fotopoulos, a filmmaker whose visions are as audacious as they are uncompromising.” – RogerEbert.com

“There is no shot in a Fotopoulos film or video that does not mine the psychological affect of the frame, the camera placement, the lighting, the lens. ” – Screen Slate

100 min
English and German (with subtitles)

Free parking at 5/3 Bank after 6:00 PM located at Western and Gunnison 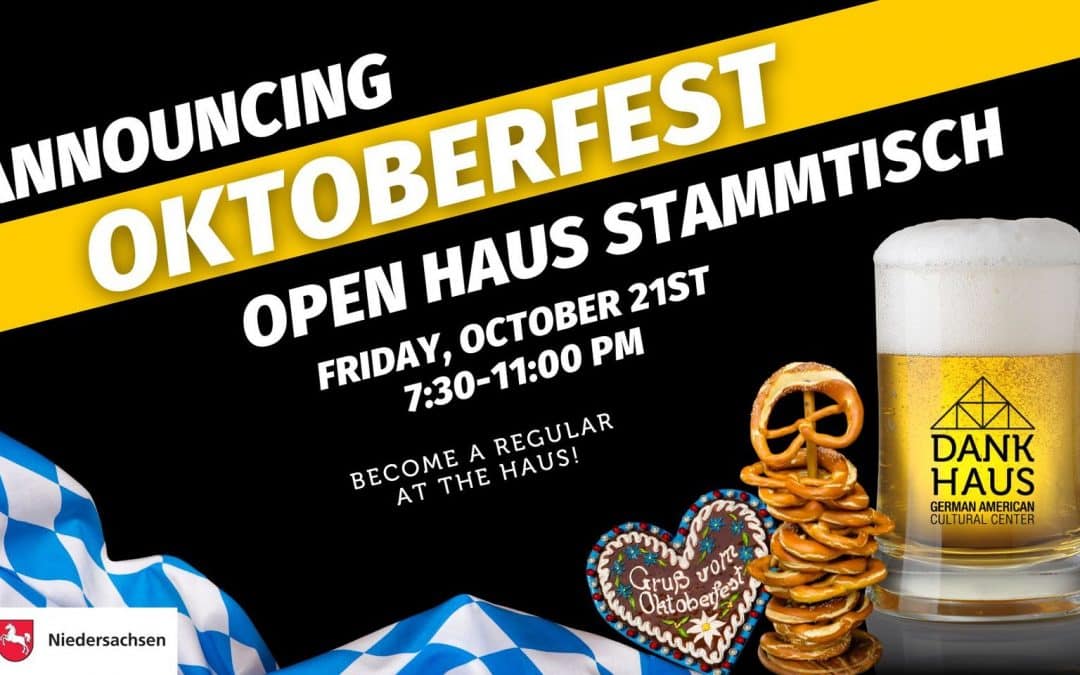 Cap off your Oktoberfest season at the best fest in town! Our indoor Oktoberfest features live music from Paloma Band of Chicago, authentic German food and drinks, and more! Attendees will enjoy plenty of yodeling, dancing, and pretzel eating starting at 7:30 PM.
Our historic Marunde Ballroom, located on the 5th floor, will be decorated in traditional festival style and our signature vintage bar will feature imported German Spaten Oktoberfest, Würzburger and local Festzelt Oktoberfest beers on tap. Come hungry and enjoy Thüringer, Bratwurst, Leberkäse, potato salad, sauerkraut, pretzels and Landjäger!
Guests can enter our famous “Stein Holding Contest” and dance to the music of Paloma Band of Chicago. Come wearing your finest Dirndl and Lederhosen to the Oktoberfest of the Season at the DANK Haus!
Interested in becoming a sponsor? Email dank@dankhaus.com 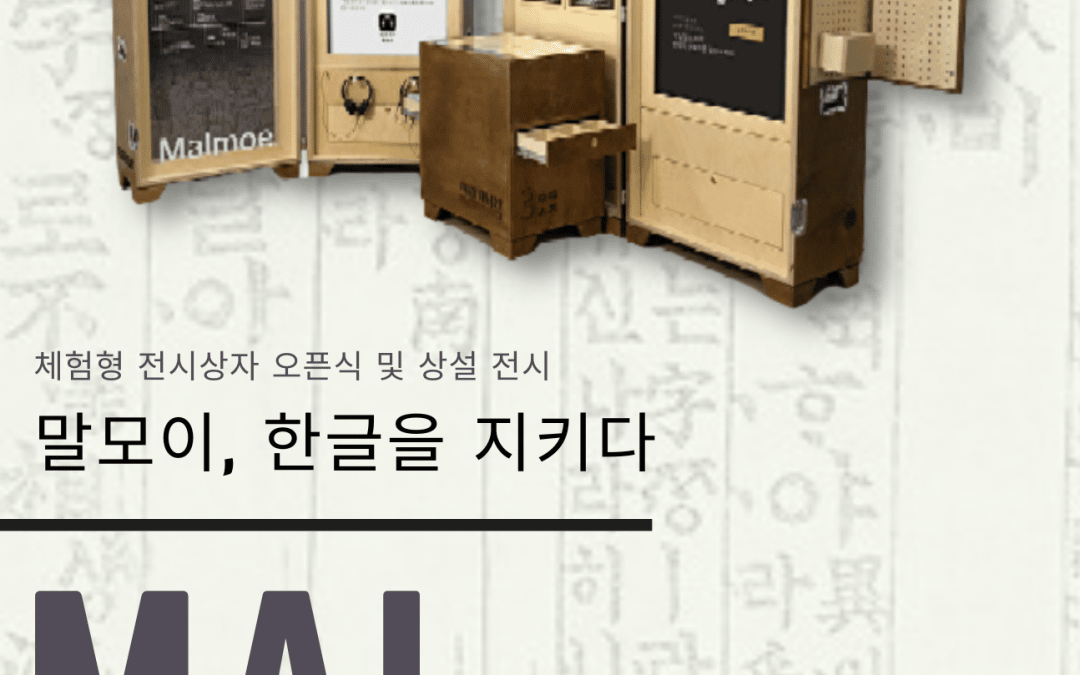 The Korean Cultural Center of Chicago and the Chicago Korean Education Center will co-host an opening ceremony for the ‘Malmoe, Protect the Hangul’ education box at the museum on Friday, October 7th at 1pm. This display box was developed and supported by the Independence Hall of Korea to educate the history of the compilation of the first Korean dictionary ‘Malmoe’. During the event which coincides with the Hangul Day, we anticipate exploring the value of the independence movement and the excellence of Hangul.